Give to the Carrie Ehlers Memorial Scholarship Fund 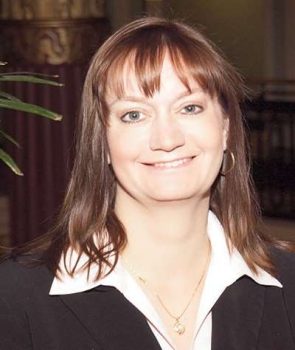 The Carrie Ehlers Memorial Scholarship Fund was established by the Express Carriers Association to honor the memory of its president, Carrie Ehlers. Each year the fund will award two $1,500 scholarships to deserving female students – one to a student at Carroll University and one to a student at the University of Wisconsin-Milwaukee Lubar School of Business. Click here to watch the scholarship video.
DONATE NOW

Beginnings:
On July 28th, 2008 we received the tragic news of the passing of our president and friend Carrie Ehlers.

Carrie served on the ECA board from 2002 and served as President from 2006 until her passing in 2008. During this time, the ECA has embarked on its most ambitious growth plans to date. Carrie led the ECA to a new look (logo and website), several technology advancements, to an outside management company, and oversaw record growth among the countless other accomplishments to better serve our members and contribute to the growth of our industry. Carrie was involved with many other organizations by serving on advisory boards, speaking on various subjects, and taking part in many round table discussions at industry conferences over the years.

Carrie worked for many years in the industry and in 1999, along with her partner Pam Witt, purchased Bonded Transportation located in Milwaukee, WI.

More important than her accomplishments to the ECA was Carrie’s dedication to her family, friends, and associates and to the many volunteer programs in which she participated or led. Carrie was always the first to volunteer, had a deep passion to help others, and will be missed by all of us that had the pleasure to meet or work with her over the years. It was always Carrie’s goal to establish a scholarship fund for young entrepreneurs that would be funded by the ECA.

Fund Established:
To honor Carrie’s memory and to continue her dream, in January 2009, the ECA Board of Directors established the “The Carrie Ehlers Scholarship Fund”. Due to Carrie’s commitment to her community what better place to honor her memory than in the city she loved, Milwaukee, WI. Upon recommendations from ECA President Stuart Hyden, Immediate Past-President, Brad Westrom along with board member and Carrie’s business partner Pam Witt, the board selected the Greater Milwaukee Foundation, Inc to manage the fund, committing the first $10,000 toward the endeavor. Simultaneously the board approved the utilization of a portion of the association’s annual golf tournament (just prior to the Marketplace) toward achieving the minimum vesting amount of $25,000.00.

About the Fund:
The scholarship, once fully funded, will be managed by the Greater Milwaukee Foundation, Inc. Initially a $1,000 scholarship was to be awarded to a graduating female senior who is pursuing a degree in business. With the support of the Greater Milwaukee Foundation, Carroll University was selected as the recipient of the scholarship. In January 2014 Megan Reagles of Carroll University was selected as the first awarded the first scholarship.

The fund has now grown to just over $126,000 in 2020 due to the generosity of the ECA Membership. The committee has established a new goal of $100,000.00 as the ECA continues the expansion of the scholarship fund. The board installed Stuart Hyden, Brad Westrom, and Pam Witt as permanent co-chairs of the Scholarship Committee until their retirement.

We know you'll receive a great value joining the ECA

Have further questions about joining ECA

Are you ready to join our network of
Carriers, Shippers, and Vendors?

If not, feel free to contact us anytime with questions or concerns.